LPL_IlkaI
Lawrence Public Library
Staff-created list
Audubon in the Anthropocene: Works by Matthew Day Jackson | March 21, 2020 – November 29, 2020 | Larry & Barbara Marshall Family Balcony, 404 Audubon in the Anthropocene highlights a portfolio of prints by contemporary artist Matthew Day Jackson titled There Will Come Soft Rains. In this portfolio, Jackson dramatically reworks late edition etchings from John James Audubon’s iconic series The Birds of America. Each Audubon bird rests amidst potential apocalyptic settings interpreted by Jackson, often referencing final scenarios of the Anthropocene. Scholars have proposed the “Anthropocene” as a term for our current geological period, characterized by the significance of human intervention in our ecosphere. Although the term has not been formally adopted by the geologic community, interest in and debate about the Anthropocene coincides with scholarly discussions concerning Earth, its life, and our collective future. The twelve birds featured in Jackson’s portfolio reflect the intertwined relationships of humans and other life on Earth. Two birds, the passenger pigeon and Carolina parakeet, are now extinct, and a third, the ivory-billed woodpecker, is critically endangered. The others, including the wild turkey, cedar waxwings, mallard duck, blue jay, flamingo, snowy egret, wood duck, and ruffed grouse, have populations that have either remained stable or increased since the 1970s, sometimes due to human action and sometimes due to bird adaptation. Audubon in the Anthropocene explores the intertwined relationship between birds and humans since the publication of The Birds of America in 1827, as well as what may become of these birds, humans, and Earth itself in the future. This exhibition is supported by KU Student Senate and the Linda Inman Bailey Exhibitions Fund, and includes generous loans from the Linda Hall Library and the Kenneth Spencer Research Library. (Information source: Spencer Museum of Art)
By: All The Birds In The Sky
by Anders, Charlie Jane

The Nightjar
by Hewitt, Deborah

The Strange Bird
A Borne Story
by Vandermeer, Jeff

A Feathered River Across the Sky
The Passenger Pigeon's Flight to Extinction
by Greenberg, Joel 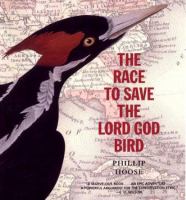 The Race to Save the Lord God Bird
by Hoose, Phillip M.

The Life List of Adrian Mandrick
A Novel
by White, Chris 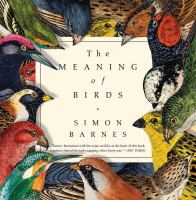 The Meaning of Birds
by Barnes, Simon