Saved Searches Advanced Search
The library is currently experiencing a bug with our Overdrive access within the catalog. You can go directly to https://lawrencepl.overdrive.com/ to access your items immediately.
The library will be closed TUE, Nov 3 for Election Day. For more information, visit our 2020 election and voting page.
LPL Express is open MON-FRI from 10 AM-6 PM and SAT-SUN from 12-6 PM. Masks are required. Aim for a 15-min visit per day unless using the computer lab. Learn more here.
Print 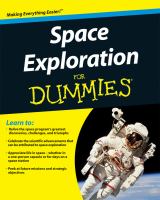 Your comprehensive guide to remarkable achievements in space

Do you long to explore the universe? This plain-English, fully illustrated guide explains the great discoveries and advancements in space exploration throughout history, from early astronomers to the International Space Station. You'll learn about the first satellites, rockets, and people in space; explore space programs around the world; and ponder the controversial question: Why continue to explore space?

Take a quick tour of astronomy -- get to know the solar system and our place in the galaxy, take a crash course in rocket science, and live a day in the life of an astronaut

Watch as space exploration matures -- from the birth of the Space Shuttle to the creation of the Mir Space Station to successes and failures in Mars exploration, see how space programs reached new levels

Understand current exploration -- review the telescopes in space, take a tour of the International Space Station, and see the latest sights on Mars

Open the book and find:

The nitty-gritty details of becoming an astronaut

A grand tour of the solar system through space missions

Explanations of tragedies and narrow escapes

Ten places to look for life beyond Earth

There are no comments for this title yet.

There are no ages for this title yet.