Saved Searches Advanced Search
The library will be closed TUE, Nov 3 for Election Day. For more information, visit our 2020 election and voting page.
LPL Express is open MON-FRI from 10 AM-6 PM and SAT-SUN from 12-6 PM. Masks are required. Aim for a 15-min visit per day unless using the computer lab. Learn more here.
Print 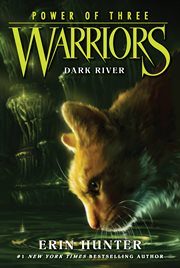 The second book in this third series, Warriors: Power of Three #2: Dark River, brings more adventure, intrigue, and thrilling battles to the epic world of the warrior Clans.

Lionpaw, Hollypaw, and Jaypaw, grandchildren of the Clan leader Firestar, are thriving as ThunderClan apprentices. Yet their new responsibilities bring new dangers, and each young cat is about to discover darkness: in the past, in the Clans--and in themselves.

This book was great!! I loved reading it!!!

T'was great! I really reccomend this book and it was soooooø gôöd! I have nothin' to say except
this
=<^.^>=

I started reading the books and I can not stop they are awesome and I have so many words to tell you about this book! It is awesome and I recommend these series of warriors cats for anyone who loves animals and wants to know an animals feelings. I can tell you this...... GO WARRIORS and GO ERIN HUNTER

I sort of like how Jaypaw was portrayed: a blind cat training in medicine with enhanced other senses. I feel as though books these days don't portray "disability" as a strength. Either they don't have any, or it's "pitied" upon. However, here a cat is still respected and treated as an equal. In fact, his skills are enhanced in a sense, where it almost seems to compliment him without limits. Also, he has a strong sense of right and wrong, that helps lead him off the path Tigerstar and Hawkfrost want to guide him on. I worried a bit for the other two siblings in this book, but I guess it will eventually work out.
- @Siri of the Teen Review Board of the Hamilton Public Library

not bad all these books are pretty gory but still great

If you guys haven't read the series you really should. It is so addicting, once u start u can't stop. I started the series in like, May maybe late April but, I'm already like more than half way done the series. I like the books because it is suitable for ages 9 and up and is a book that can be enjoyed by girls and boys. Also the warriors cat game the new prophecy is pretty fun, kinda cheesy. PLEASE READ THE SERIES AND FINISH IT!😺😸

i hope this is a great book!!!!!!plese do not have any cats die in this book or i will be very sad if it is a bad cat it will be funny

Beginning with Warriors: Into the Wild, the entire Warrior series is a sheer delight, suitable for young people and adults alike. In Dark River the three chosen cats draw closer and closer to when they must use their special abilities to help their clan.

blue_elephant_5991 thinks this title is suitable for 9 years and over

red_raven_366 thinks this title is suitable for 8 years and over

white_wolf_1225 thinks this title is suitable for All Ages

ReneeMG06 thinks this title is suitable for 9 years and over

blue_cat_12791 thinks this title is suitable for 10 years and over

alec_gv thinks this title is suitable for All Ages

MonkeyTail thinks this title is suitable for 9 years and over

green_cat_2559 thinks this title is suitable for All Ages

red_cat_13654 thinks this title is suitable for 7 years and over

Why was Leafpool so fond of secrets? Secrets about his gift, secrets about Mothwing and Starclan. He suspects there were even more secrets buried in his mentors heart, secrets that she guards so closely he had never been able to glimpse them. "Knowledge can be dangerous," Leafpool warned. Frustration clawed Jaypaw's belly. He lived his life in darkness; he longed for light and clarity, not shadows. He forced away his anger. Leafpool had lived too long with secrets. He couldn't change her mind in a single night. But why did she have to drag him into her complicated world ? - Jaypaw's narration

"Friendship is worthless," Tigerstar growled. "You have learned an important lesson, one that I could never have taught you. But I will teach you much more. There'll come a day when you'll be so powerful, you'll have no need of friends. And when that day comes, I promise you will never regret that you chose to be a warrior.

"Without light, you will have only your instincts.Follow them and if they are true, you will be safe."-Rock to Fallen leaves

"Friendships are worthless. One day you will be more powerful then ever, and you will never regret choosing to be a warrior."-Tigerstar

"One day I will be a Sharpclaw."- Fallen Leaves

You did not expect a cat could grow so ugly. -Rock

Lionpaw begins meeting Heatherpaw of WindClan secretly at night, against the warrior code. Eventually, Hollypaw finds out and stops him, though Heatherpaw is distraught. Later, three kits in WindClan go missing, and almost provoke a battle between WindClan and RiverClan. Lionpaw, Jaypaw, Hollypaw, Heatherpaw and Breezepaw work together to find the kits, who have snuck into the tunnels in which Lionpaw and Heatherpaw had met. Meanwhile, Jaypaw discovers an old stick with strange markings, which has an ancient connection to the past.