Saved Searches Advanced Search
The library will be closed SUN–MON, July 4-5 in observance of Independence Day. We'll reopen TUE, July 6 at 10 AM. Our online library is open 24-7.
Updates about our Reopening Plan live here.
Print 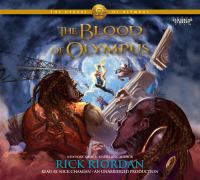 The Blood of Olympus

Though the Greek and Roman crewmembers of the Argo II have made progress in their many quests, they still seem no closer to defeating the earth mother, Gaea. Her giants have risen-all of them-and they're stronger than ever. They must be stopped before the Feast of Spes, when Gaea plans to have two demigods sacrificed in Athens. She needs their blood-the blood of Olympus-in order to wake.

The demigods are having more frequent visions of a terrible battle at Camp Half-Blood. The Roman legion from Camp Jupiter, led by Octavian, is almost within striking distance. Though it is tempting to take the Athena Parthenos to Athens to use as a secret weapon, the friends know that the huge statue belongs back on Long Island, where it might be able to stop a war between the two camps.

The Athena Parthenos will go west; the Argo II will go east. The gods, still suffering from multiple personality disorder, are useless. How can a handful of young demigods hope to persevere against Gaea's army of powerful giants? As dangerous as it is to head to Athens, they have no other option. They have sacrificed too much already. And if Gaea wakes, it is game over.
Publisher: New York : Listening Library (Audio), 2014.
Edition: Unabridged.
ISBN: 9780804193757
Branch Call Number: eAudio overdrive
Characteristics: 1 online resource (12 audio files) : digital audio file
Additional Contributors: Chamian, Nick
Overdrive, Inc

kitten_10 thinks this title is suitable for 7 years and over

TheTwoBecomeOne thinks this title is suitable for 11 years and over

LWhitton thinks this title is suitable for All Ages

sarwat101 thinks this title is suitable for 9 years and over

injustice123 thinks this title is suitable for 8 years and over

MariamMuenn thinks this title is suitable for 11 years and over

This book is the last in its series and is the best of the five. After the crew undergoes many hardships and challenges, it was time for then to face one last challenge, possibly the most dangerous. In my opinion, the best part of the book is that it includes the perspective of Reyna and Nico, as it was the most dramatic part. While it may seem to be that ending the series in one book may be a bit rushed, the plot makes it easy to understand, and I personally never felt overwhelmed. Rick Riordan’s novels are action packed and entertaining, so if you finish this series, you should definitely look at the others (Magnus Chase, The trials of Apollo). Rating: 5/5
@bookreviewer888 of the Hamilton Public Library Teen Review Board

The Blood of Olympus is the fifth and final Heroes of Olympus book, and boy does the series go out with a bang!

Just as in the previous books, the action picks up immediately where it left off in the book before. The demigods are still traveling the world in the Argo II with the Athena Parthenos statue, trying to complete their mission in time to stop Gaea from awakening. Every time Rick Riordan would remind us readers how many days were left, I'd get more and more nervous! How on earth would these teens get back to Athens in time? And on top of that, they start hearing about an impending war between Camp Half-Blood and Camp Jupiter, and they decide that the statue must get back to Long Island!

This young-YA series continues to impress me. There are many characters, and many personalities, and much mythology, but I didn't struggle too much to keep up. (I listened to the first four books on CD, and the first half of the fifth book... didn't realize until I picked up the hard copy to finish the story that there's a really handy glossary of characters and gods in the back of the hard copy.) The pacing of the series is great; perhaps because Riordan has had practice laying out series? I never felt overwhelmed with too many characters or plot points being introduced at once. By the time you reach this fifth book, there are a lot of characters, but they're well-developed, so you feel like you know them. I also love the "cameos" in this final book! The Amazons make a brief appearance, for instance. That's fun.

Speaking of characters being well-developed... the main characters all show remarkable growth through the series, but none of it feels forced. A few natural relationships form, deep friendships are forged, and all of them mature. Occasionally, younger-YA or MG books have moments in the ending that feel very "after-school special," but this book didn't. Riordan trusts his readers to pick up on the growth and changes without being overly explicit. I appreciate him trusting me like that.

As I mentioned in this review's opening, The Blood of Olympus ends on a huge bang. It doesn't wrap up overly neatly too quickly. (It is younger-YA, so it does eventually wrap up pretty nicely.) There's lingering tension, even after the battle ends. I won't tell you anything about it, but I LOVE LOVE LOVE the ending! It was so right for this series. I can totally see the readalike comparison to the Harry Potter series as far as writing and action go. It's hard to describe, but Riordan manages to stage a huge battle with many Greek and Roman gods and demigods, where some campers even end up slain, without being gratuitously gory or descriptive. It's amazing.

And finally, I both listened to and physically read this book. (My audiobook checkout expired before I reached the end of the story!) The narration is done by Nick Chamian, who did the previous four books as well, and he continues his excellent storytelling. I would definitely recommend the audiobook... except that there's that great glossary of gods/terms in the back of hard copies! I don't know... that throws a small kink in my audiobook recommendation! No matter what format you choose, I do recommend that you try this series!

An exciting finale to the Heroes of Olympus series. I will miss these characters and hope to see them in a different series in the future.

is this the whole story or only the first chapter, because that came out FAST!