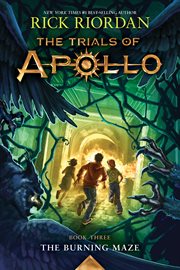 Some content below may have been reported by users for containing spoilers or offensive content. Learn More

jason was a favorite

and if the riordanverse couldn't get any worse its rumored (as in this might not be true peple) that either Frank, Hazel, or Reyna will be *cough* killed off in ToA 4.

This was a great book. Hope there's another!~

Best book in the series

EVEN IF THERE IS A SMALL CHANCE THAT THEY CAN STOP THIS, THEY OWN IT TO EVERYONE WHO IS NOT WITH THEM TO TRY. AND THEY WILL.

Really good book. But not as great as Rick Riordan's other Percy Jackson books.

Tagged as Offensive (Hide) (Show)
m
mikeandemilyd Jan 31, 2019
This content is tagged as offensive and is hidden.

WARNING TO PARENTS:
This series (Trials of Apollo) contains mature content for children. There are bisexual characters as well as homosexual relationships.

the books good but REALY? why jason he was the best character they stabbed him twice realy rick? not cool

it was a good book.

This book was okay. It definantly wasn't as good as the Heros of Olympus series, but I'm glad that the brought back old characters. I was VERY mad at Uncle Rick for the character that he killed. Unlike most people, they were one of my favorites. I hope they come back to life some how...

It is a good book
The Greek god Apollo, cast down to earth as the ungifted human teenager Lester Papadopoulos, and his demigod friends must go through the Labyrinth to find the third emperor--and an Oracle who speaks in word puzzles--somewhere in the American Southwestpollo, Meg, and Grover find themselves in the smoldering ruins of Palm Springs in this third installment in Riordan's popular Trials of Apollo series. Fires and drought are putting the dryads in danger, and Apollo knows that the only way to restore the rightful order is to free the oracle hidden below ground in a dangerous labyrinth. As the stakes get higher and Apollo experiences loss and sacrifice firsthand, the god loses some of his trademark braggadocio and begins to suspect his punishment losing his godly powers to walk the earth as a chubby human teen is more than just a product of Zeus' short temper. Meanwhile, Meg begins to uncover some important secrets from her past. Of course, this is Riordan, so there's plenty of snarky banter and comedy mixed in among the drama. Amid the cinematic pacing and well-choreographed action scenes, Riordan squeezes in plenty of character development into the expanding cast of characters, even minor ones who don't get a lot of page space. Riordan's fans will appreciate seeing some familiar faces in this puzzle-filled installment, and a cliff-hanger ending will make them eager for the sequel.--Sarah Hunter Copyright 2018 Booklist
.

I love how Rick includes old characters in this series. It also gives a sense of nostalgia for those who have been a fan for many years. This series keeps making the reader flip to the next page because the writing is very capturing.

I love how Rick Riordan combines old and new characters in this series, making it all the more amazing. This book was very funny and I hope I don’t have to wait too long for the next one to come out.

This is literally heart wrenching and hilarious at the same time!

The book went way beyond my expectations, and I absolutely loved this book. The Burning Maze will tear your heart apart with joy, sorrow, and anticipation, I couldn't put this book down. For most of us Riordan fans, we were devastated by a tragedy that occurred during the book, and ... ;(

This book was a great addition to the Trials of Apollo series. It had many unexpected twists, and the characters were well built. The book made you feel like you were going on the same adventure with them. The book was interesting, and had you laughing at every page. Overall, it was a great book!

I think the series just gets better and better with this new book.

I think this book is a book that you should read, along with all other Rick Riordan books.

a great thing about rick riordans books is that it has many fantastic adventures in many deferent fantasies including gods and more. in my opinion this is one of his best books made and many should read it.